Cobden is a small community in the Township of Whitewater Region, in Renfrew County, Ontario, Canada. It is located roughly halfway between Renfrew and Pembroke on Highway 17.

Cobden has been the victim of many fires. This has destroyed almost all of the original buildings. Main Street has suffered worst from fire including one in 1913 which destroyed the Cobden Sun building and many historical records. A hydro electric dam began operating at the falls south of Cobden. It supplied the town, off and on, with power until it was destroyed, April 12, 1934, in a raging flood. Large blocks of ice ripped the dam apart and poured over Highway 17, tearing away sections of pavement. The plant operator, Mr. Bill Wall, was stranded in the upper section of their house until flooding subsided. The town then started receiving power from a station in Calabogie. Council elections in 1949 were dominated by the issue of whether or not to hold another plebiscite on establishing a waterworks system. A previous plebiscite had come out 82–56 against. But times were changing quickly; after the war a new council was elected and the next vote was 124–46 in favour and by the early 1950s Cobden had water. The waterworks system required constant maintenance up until a major retooling in the 1980s. The visibly dominating water tower was built in 1988 replacing the original (built in 1951).

A bigger school was needed by 1903. The present-day school, Cobden District Public, was built in 1938 and initially served as a high school until Opeongo High School was built.

Today, Cobden’s location on the busy Trans-Canada Highway, known as Highway 17, makes it a convenient stopping place for the many travelers passing through the area. 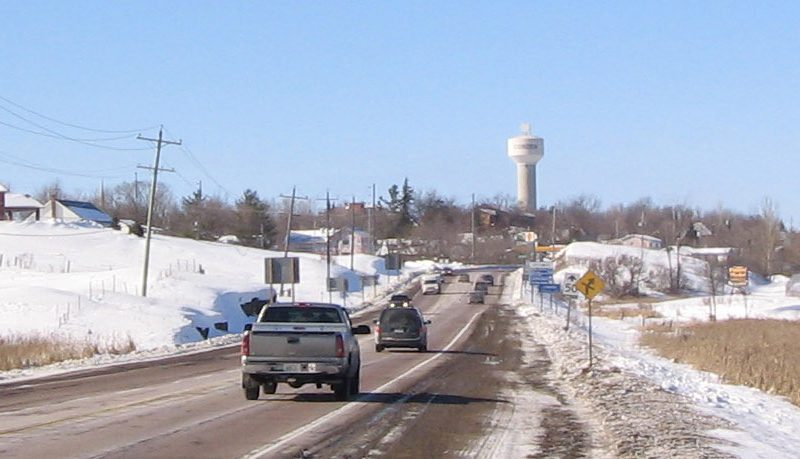